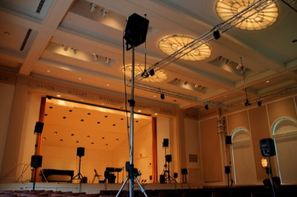 HYDRA system at Harvard in Paine Hall
This piece is my first encounter with electroacoustic composition. I took Hans Tutschku's famous Intro to electroacoustic music course at Harvard in my final semester. In the beginning of the course we worked with traditionally non-musical sounds: paper, metal, glass, wood, plastic, water, and so on. This piece is made from sounds made with a piano. Though hardly an original idea, I thought as a pianist, composer, and improviser, that I might enjoy the challenge of using a bit of each of those three modes of music-making in my first attempt at an acousmatic composition; at the same time, I thought, perhaps the computer could show me something about the piano, about composition, about improvisation, which I didn't know before. I’ve attempted to show something new and interesting with the sounds of something that is very recognizable.
​
Premiered with diffusion by the composer on the HYDRA system at Harvard in Paine Hall on May 10, 2016​.