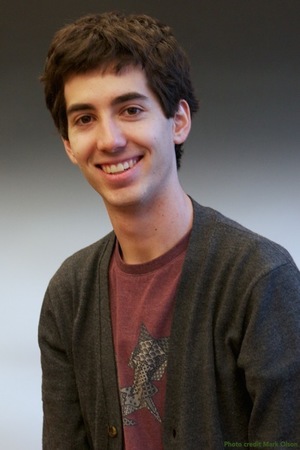 Phillip Golub, 23 years old, grew up in Los Angeles in a musical family. He began studying piano at the age of five, playing jazz at the age of twelve, and composing as a teenager. Jazz and concert music continue to split (and join) his time.

Phillip attended Crossroads High School in Santa Monica, where he was lucky to have encouraging teachers and peers in both the classical and jazz traditions. Concurrent with high school, he was one of the LA Philharmonic’s four students in the Composer Fellowship Program, and in the top jazz combo at the Colburn School. These experiences led Phillip to pursue a college program that would allow him to continue developing in all of these areas.

In a five-year joint program at Harvard and the New England Conservatory, Phillip is working towards a BA in English and an MM in Jazz Performance. Stemming from his interest in poetry, which has led him to take two courses with Helen Vendler at Harvard, Phillip also has an interest in poetry in music. The National Children’s Chorus premiered Weathered and Revealed, a song cycle on the four seasons with new poems by his friend and young poet Pablo Uribe, in 2013 at The Broad Stage in Santa Monica. In Novemeber of 2014, the New York Virtuoso Singers will premiere God’s List of Liquids at Merkin Hall, a choral setting of a poem of the same name by Anne Carson. Phillip was also commissioned by the Lake Champlain Chamber Music Festival, who performed his quartet Fireflies in August 2014.

Aside from commissions, Phillip has also received a number of awards as both a jazz and classical musician. He has been a grand prize winner of both the ASCAP Jazz and Classical Young Composers Awards (the classical, known as the Morton Gould Award). He has also been recognized by the National Foundation of the Arts Young Arts Scholarship and the Downbeat Magazine Student Awards.

Summers have been a unique opportunity for Phillip to study composing in a focused environment. He attended the YellowBarn Young Artist’s Program four years in a row, writing chamber music for his peers. The summer of 2014 took him to Berlin on an Artistic Development Fellowship from the Harvard Office of the Arts to study at the FUBiS composition workshop. Opportunities to spend time focusing on jazz have also led Phillip to the Vail Jazz Workshop and the Jazz Composer’s Orchestra Institute, at Columbia Univeristy, partnered with the American Composer’s Orchestra.

In his free time, he likes to go hiking in the mountains around Los Angeles, watch and play tennis, and argue against the end of history.